A couple of Twitter bots to lighten your day

.When you think of bots on Twitter, something like Pentametron isn’t exactly something that people might want talk about. I mean, bots are just programs that ruin elections and make everything related to online social media worse than before, right? If you want to see things like that, yes, but just like most things created by people, bots are just tools. So depending how the creator or user uses that tool, it either might be a chaos creator or bringer of light.

Use it for good, my son

The whole idea for Penametron came from an idealist poet and Twitter API lover, Ranjit Bhatnagar. One day, when he tried to figure out how he came make art from a tweet, he didn’t exactly found out a specific way of accomplishing that ordeal through the usual means. So he decided to just create his own tool that would search through the entire, bring up a couple text and just put together to make them rhyme.

Well, for most of the part. As art is subject matter, over which I will not even try to make a statement right now, Ranjit thought of how you can make art from shit. And if you like random tweets, which united make a rhyme, then you’ve got the gist of the idea.

As the man elegantly puts it, “With algorithms subtle and discrete I seek iambic writings to retweet”. See, now there is a man that knew how shitpost without any fear. A true artist, if I may say so myself. 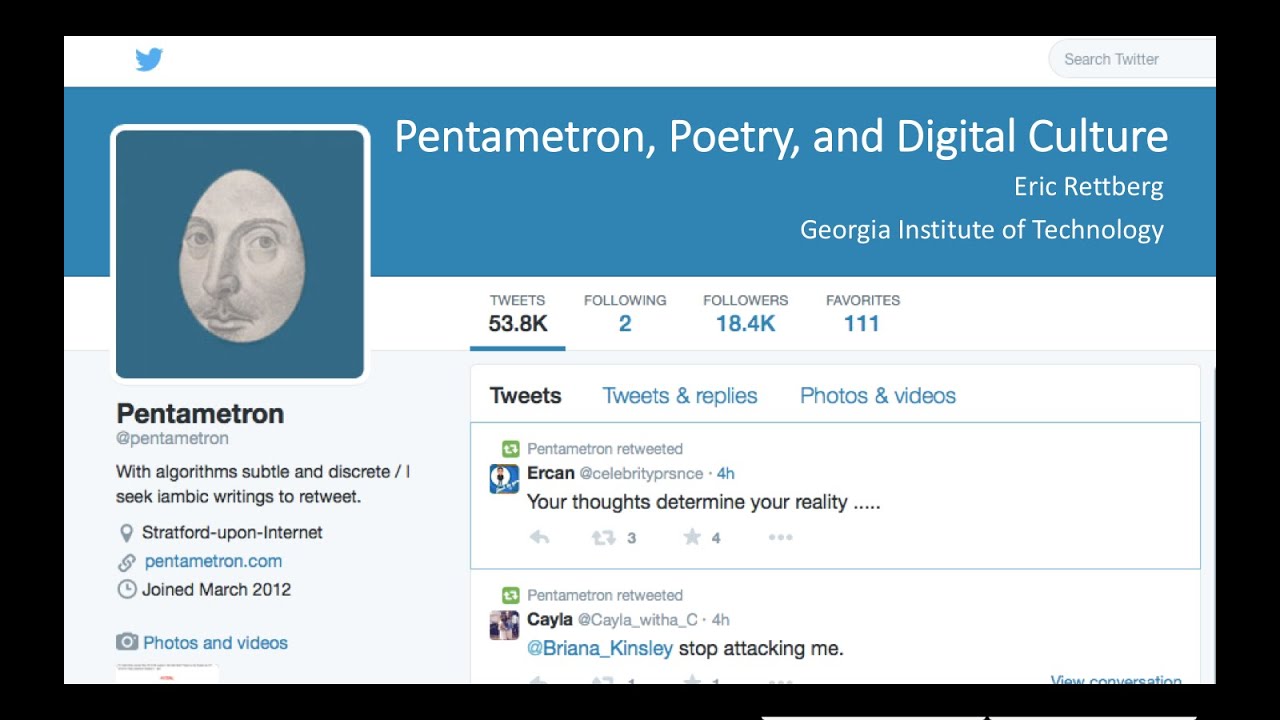 Show me some example, otherwise it didn’t happen

In order to see how much fun Pentametron can be, here are a couple of things this little bugger managed to come up with. Enjoy the carnival, my dear users.

Oh, before I forget, the creator made also several lists of the poems coupled up by the app, and here is a snip-bit from one of it. The name of the novel is “I got an alligator for a pet”.

The lakers better win tomorrow tho

I don’t remember starting anything-

I am a master of metal string

Why isn’t Tory Kelly famous yet?

Man vs Food in half an hour woo

We`ll wright a letter to the alphabet

Allergic to retarded questions too.

I still don’t understand why the man hasn’t slapped an Amazon sticker on this collections, put them on the site and just let the money flow? Maybe he has artistic integrity? Eh, who knows?

State of the bot so far

Unfortunately the Pentametron is a bit of limbo right now. The site is still up, and you find all of the novels for download from there, but for the time being Ranjit Bhatnagar is hasn’t updated the site. Or many made any big updates related to the bot.

Still, like all many great artist, I do hope that he makes a comeback. Especially now, with current state of Twitter.

Combine two titles to get the ultimate one

Have you wondered how a Buzzfeed style of headline might look like if you combine two random titles from the web? It really doesn’t matter if you answer is yes or no, because someone already had this plan and created a bot for it.

Properly named Two Headlines works by searching the Google News. Then, it picks two different headlines and combines them into a humourful tweets. If you look further into it, though, you might find a deeper meaning to the posts. Actually, it is just shit-posting at its finest. Still, when you see a recent article title being combined with another one, you might just get comedy gold.

The bot also has Twitter account, were it managed to post somewhere around 20,000 of tweets. Even the creator didn’t took it seriously when he started day-dreaming about the bot:

“Part of the reason it’s funny is its timely- it’s always talking about what’s in the news right now because it’s pulling from Google News. The other advantage is that, much like Twitter, news headlines have a very specific way they-re written, both with publications and across publications. … It plays with the convention of headline-writing itself and subverts those expectations. Its hit rate is very high. Probably four or five tweets a day are very funny, which is a pretty high hit rate for a bot.”

If there are people interested in creating something similar, you might also want know that the code for the bot is available. For free. So if anyone wants to use it, go for it. That is, if you want to create a shit posting machine for yourself.

What else is out there, in the vast world of Twitter bots?

To be perfectly honest, I am a bit fascinated by this little bubble that has sprang around Twitter.  Also, the many uses that people have found for the online world of posting. Among my searches I have also found bots that are used to predict or announce earthquakes. Another one is actually a very useful one, that if properly groomed might even help saving life. It’s called USINJURES and it does a simple thing. It collects descriptions from a government database. Also, it gathers information regarding the state of emergency rooms and descriptions for what is happening inside of them. For the time being, the users use it for fun.

For most though, a Twitter bot has become something of a double edged sword. You can see this in the following segment from a The New Yorker article-

“Twitter bots represent an open-access laboratory for creative programming, where good techniques can be adapted and bad ones can form the compost for newer, better ideas. At a time when even our most glancing online activities are processed into marketing by for-profit bots in the shadows, Twitter bots foreground the influence of automation on modern life, and they demystify it somewhat in the process.”

A review of the Samsung Galaxy S9+