The last text about the settings for Warframe was more of a lore, explaining part. With that, I wanted to go over some of the story and lore bits, but I still left out some things. You really need to play it, as it leaves many stuff for the players to discover and to be honest, that’s how I would describe the game to newcomers.

It is very vague, because basically that’s how every entertainment creation is like. It’s something for you to explore and enjoy. Now, to the technical side of things. How do you play Warframe? You start of the game by selecting one of the starting Warframes, the stat balanced Excalibur that favours melee weapons over ranged one. Volt, which mixes speed with defense, so you can play him either ranged or melee. And there is Mag, the once good ranged frame, but then got nerfed so hard, she became a running joke. Still, if you want my opinion go with either Volt or Excalibur, because of one reason alone. As you play the game, you have to fight bosses, which drop parts to build the rest of the Warframes. Mag is an early drop, while the other two come much later.

So what do I mean by drop? Well, in the game you have to collect and build. The building part is quite easy. Get or buy a blueprint for the weapon or frame, get all materials by doing certain missions and voila. All of this sounds a lot like good ol farming, right? And random generated drops? Yap, the game has these as well. With one difference. You get into a mission, then one out. You don’t have to stay on a single map for an entire hour continuously. (You can, but at least you have the option) . Then you can also change parties on a fly, so you don’t have to worry about the same teammates if you don’t like them.

Another favourable thing that adds to the tired MMO formula is the gameplay.

Warframe is a fast paced game. And I mean it. Missions take as long you want or need them to. How? By each having different objectives. Exterminate requires you to kill a number of mobs and then get out. This gives time to explore the entire map or finish quickly and leave. Defense and survival are based on time and rounds, and each are a multiple of 5. In survival you have to survive for 5 minutes, until the air supply runs out. You gather supplies by killing enemies and destroying caches. After each five minutes, you get a reward and you can either continue or leave.

Defense gives you a target to defend for five rounds and then either stay or leave. And this are only three of the around 20 mission types. Some involve you sabotaging an enemy headquarter, others are timed events that allow you chose to ally with a faction against another.

As for were you play, the game takes on different maps with tiles that represent the outside of Earth of Mars. Or you can be inside an enemy ship or an infested landscape. Icy worlds, or grand factories.

Still, how do you kill in this game?

Here, have my bow. And my axe. And my laser shotgun

Besides the Warframes, your main way of interacting with the world is by inflicting as much damage as you can. That is done by using a primary ranged weapon. These can be a bow, rifle, shotgun, sniper, explosive bows, plasma shotguns etc. Then you have the secondary weapons. Here you have a list of basic one-handed guns, like pistols, ninja stars or space lasers. And that is a very abridged way of putting it, but just to be fair, it all resumes to this. A shit ton of stuff for you to use. And the developers add new types every few weeks or months.

The melee are my favourite option, because of one thing. Each melee gives you an animation stand, which helps your character to appear like a bad-ass, psychotic mercenary. You have a selection of many, wonderful type of things that can stab, smash, and hit and pulverize mobs.

Most of these would be useful only on the starting levels though, as any good MMO games needs an advancement system that feels fulfilling. Here is another step that Warframe took to make something special.

Your character and weapons level up, but only to level 30. You get some stats increase, but nothing too special. To actually evolve your frame, for example, you need mods. These are cards that increase certain stats and effects if you apply them. They even give you options like adding a fire, ice or other elemental effect to your playstyle. Now, there are playthings that are centred on certain elemental or stats, but with the help of mods you don’t have to play only as that style. 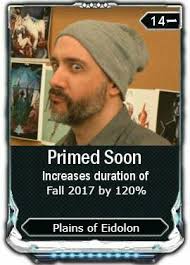 Isn’t it all too confusing?

All of my explanations up until now might be a bit too much, especially if you just start the game. And Warframe is a bit obtuse in this part, but there is a plus side. What the game does not explain, the community is more than eager to do it. It has one of the most devoted and explanatory group of people I have encountered in the game. There a ton of people that try to help newcomers to enjoy the game, and very few times I saw actual trolls that just want to make fun of people.

Most of the people that enjoy the game have grown a bit of an attachment of the developers, Digital Extreme and emulate them a bit. If you ever watched one of their stream, in which they present and explain the new content, they also respond and address player grievances. Sometime playfully, other times seriously but they never insult the base for their criticisms.

Warframe, in the end is more of a group of people that try to build a fun-game, that many can enjoy, both from the player base side and the developers one.